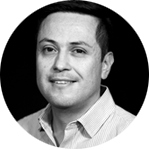 John grew up in Los Angeles and received his MFA in Directing from the UCLA School of Film, Television and Digital Media. He began his television career as a freelance editor and then as a producer/editor for CBS, creating original video content for the broadcast company’s interactive division. His passion for writing, however, led to placing in various screenwriting competitions including Austin Film Festival. In 2015, John was accepted into the Warner Bros. Television Writers’ Workshop, and after completion was staffed on Training Day (CBS).