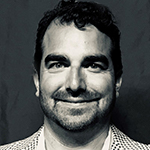 John Fitzpatrick is a television editor and independent film writer/director/producer. His genre shorts have garnered several awards at genre film festivals worldwide and his horror web-series Scary Endings is one of the most watched horror anthologies on YouTube.  Following the Directors’ Workshop, he made his television directing debut on an episode of Supernatural (CW).