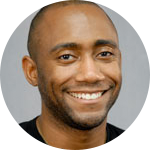 I was raised mostly on the South Side of Chicago in a family full of loud, lively, animated storytellers. As far back as I can remember, I’ve always been writing, and I spent more than one summer writing short stories on my grandmother’s electric typewriter. After a long period when I was convinced I was going to go to medical school, I went on to train as a playwright, and I’ve watched as television has grown and changed into a medium that takes more risks and tells more specific kinds of stories. Thinking back to my own personal relationship with television, I’m thrilled to have the opportunity to reach wider audiences and to tell deeper stories over longer periods of time.

My favorite television characters are those in whom I can see some of myself but who at the same time can do and say things I always wished I could. By those criteria, I’d have to say my all-time favorite is Claire Fisher from Six Feet Under. I’d admired plenty of TV characters before, but I’d never really identified with one until Claire. She and I were the same age — we started college at the same time, and the series ended as I was ending college and transitioning to the next phase of my life. Claire, like me, found herself in a generation that grew up in relative comfort but still felt a profound sense of unease about the future. And as Claire spent the series trying to figure out who she was, she wasn’t afraid to make a lot of mistakes, and own them. I often wish I shared that trait.