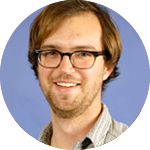 I was raised in the woods of Newburgh, Maine. We didn’t have cable growing up, but I did burn a great deal of time sitting in front of the few broadcast channels we did haveÉ when reception permitted. When I wasn’t doing that, I was formulating stories of my own. I think what really cemented my desire to be a television writer was the show Six Feet Under. It was a great take on the standard family drama. The characters were layered and relatable. I loved that the Ôdeath of the week’ informed each of their current predicaments and made light of the darker side of life. It was the perfect blend of tragedy and comedy.

This is tough, but I’d probably have to say Chris Stevens from Northern Exposure. He’s the most fascinating, likeable, eclectic character I’ve come across. Despite his criminal background and bad childhood, his time in Cicely, Alaska completely reformed him. He was poetic, worldly and had a tremendous amount of heart. Whether you needed a helping hand or philosophical guidance, Chris Stevens could always help. We all need a Chris Stevens in our life.