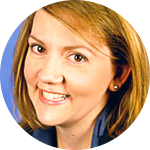 I grew up in Midwestern suburbs, Chicago then Detroit. I started my career in improvisation and sketch comedy, first performing and soon writing comedy. Writing became like improvising on the page to me, only better because I got to go back and edit it! As I was working with sketch comedy shows I started learning more about television writing: taking classes, reading books, listening to DVD commentaries. And without fail, whenever I heard TV writers talk about life in the writers’ room, I felt like they were speaking my language. Pitching ideas, punching up jokes and working together with others, it was stressful for sure…but it was also all the things I loved about improv and sketch. Plus, a bigger and more diverse audience. And the ability to follow characters and stories over multiple seasons (one hopes). That’s inspiration enough for a TV groupie like me.

The New Adventures of Old Christine

Kevin Arnold (The Wonder Years) – he was the first television character who spoke to me and what I was going through. Other than the fact he was a boy and I was a girl, we had a lot in common. We were both adolescents who still had baby round faces and were struggling to understand the world and people around us,. And although I lacked the bittersweet voiceover that spoke to my childhood lessons with a refreshing wryness about loss of childhood innocence, I more than related to Kevin, I ‘came of age’ right along with him.