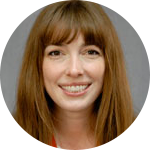 I was born in sunny Southern California and raised in Long Beach.   However, that certainly didn’t dampen my love for the fantastical or the macabre.  I spent many a young hour on the edge of my seat waiting to see if Jean Luc Picard, Geordi La Forge, or Data would best the Borg.  Influenced by my annual pilgrimage to Middle Earth and my obsession with everything Ender, genre storytelling became a way of life.  Coupled with travels around the world: to the Article Circle, trekking through the cloud forests along the Inca Trail, and meandering through the polished streets of Florence, I knew I wanted to work on stories that lasted longer than just an hour or two.  Television is a medium that combines visual storytelling with the longevity of a novel – Television is where it’s at – and that’s where I want to be!

I absolutely love Laura Roslin (played by the fabulous Mary McDonnel) on my favorite series Battlestar Galactica.  Talk about leadership in an extreme situation…  Laura is forced into the presidency when humanity is on the brink of extinction.   She is such a complex and unusual female character.  She’s not a sex object – although certainly sexy.  She’s not Lara Croft – although she’s tough as nails.  She’s a real woman, who is both feminine and strong.  I love her vulnerability and I love her dogged determination.  Pretty much, she’s my hero.