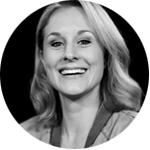 Prior to being accepted into the Warner Bros. Writers’ Workshop, Kate’s original comedy pilot Bloom was one of the top five finalists at the Austin Film Festival. Other writing credits include Raising Expectations (Family Channel), starring Molly Ringwald and Jason Priestley. In addition, Kate received her MFA from Penn State and has acted in theatre, television and commercials. After completing the Workshop, Kate was staffed on the second season of Fuller House (Netflix).