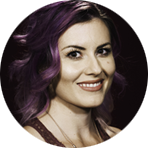 Born and raised in the Bay Area, Kelli Breslin always knew she was destined for the arts. During high school and college, her dream came true when she worked as a professional opera singer. But feeling stifled in the artistically limiting opera world, Kelli began to explore other avenues. A history buff, she found a home as a tour guide and docent in an ancient Egyptian museum – which she quickly discovered to be owned and operated by a centuries-old secret society. It was here that she discovered her love of research and giving voice to those whose stories had never been told. Kelli later moved to Los Angeles and worked as an actress for several years. An old college professor encouraged her to write, and in 2011 she wrote and produced her first short film, reigniting her obsession with storytelling. She has since produced several independent films, worked for executives at Warner Bros., Legendary, and Fremantle Media, and as the writers PA for CW’s Supernatural. Kelli also worked for Ringer creators, Eric Charmelo and Nicole Snyder (NBCU). Following the Workshop, she was staffed on You (Lifetime).