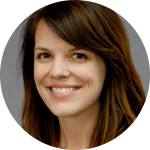 I’m from Beaverton, Oregon, just outside of Portland. I’ve always loved books and TV – anything that tells a story. I studied fiction writing, which gave me an appreciation for the craft of fiction, and I noticed many of those same elements of craft in the TV shows I watched. Once my thick brain finally connected the dots that there were people writing those shows, I was too curious not to come out to LA and see what writing television was all about.

What spec did you write to get into the workshop?

Who is your all time favorite television character, and why?

I can’t choose an all time favorite, but I do love Bill Haverchuck from Freaks and Geeks. One of the best things about television is that there are complicated, dark characters that challenge us, but there are also those characters that we just love absolutely. Like Bill, who reminds me that I’ve still got a soft spot. His peers think he is a loser, but that’s because people can be slow to recognize greatness. Bill Haverchuck has a hero’s heart.