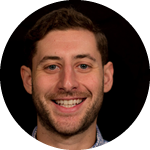 Where are you from and what inspired you to become a television writer?
Growing up in Fairfield, Connecticut, I don’t think I was aware that writing for television could be a job. I was far too busy wishing that watching it was. Instead, I became a playwright. I was drawn to the intimacy of theater, and the room for messy characters to behave messily. Then, my stepmother had surgery and her secretary gave her the DVDs for Lost Season 1. Somewhere around Locke discovering the hatch, I began to realize that maybe all that television I’d been watching wasn’t just rotting my brain. And by the time I watched McNulty take in the Baltimore skyline in the last scene of The Wire, I knew I wanted in. A character can exist on stage for a few hours, but on your screen she lives for years. And now, on TV, nuance and complexity are king. We get serialized, character-driven stories that don’t require neat endings week to week, or even at all. (We never got to hear the end of “Don’t Stop Believing” on that diner jukebox, did we?) Television’s where today’s best stories come from, and until that job watching TV pans out, I guess I’ll settle for writing it.

What spec did you write to get into the Workshop?
Hannibal

Who is your all time favorite television character and why?
I know that as a drama writer I’m legally obligated to say my all-time favorite television character is one of this decade’s Dark-Yet-Complicated Cable Antiheroes. And don’t get me wrong; Tony, Walt, Don, McNulty, they’re great. But my true favorite has to be a character more malevolent, more conniving, more deeply troubled than anyone who’s ever popped up on HBO: George Costanza. Clearly a product of a troubling home (“Serenity now!”), George is id incarnate. He can’t win, nor should he, if Karma’s got a say in it. Yes, his monstrosity puts Joffrey Baratheon to shame. But he’s a man with a code, a believer in justice and a tireless pursuer of his goals. He’s the kind of man who would break up with a woman because she didn’t give him credit for buying a big salad or would fall in love with his best friend’s girlfriend simply because she hates him. For this, he should be unlikable, unwatchable even. But George is so stalwart in his outrage, so consistent in his pursuit of fairness, and so true to himself, you can’t help but love him. Or at least I can’t. But maybe that just says something about me.