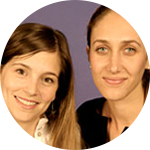 I grew up in Toronto, Canada. As I pretty much grew up on TV sets I don’t think I ever really had a choice in the matter. TV is all I know. My father is a television director – and I would have to say the strongest influence in my life. I would follow him to every set he’d let me. And now I’m working on a project that I wrote and he directed… Full circle, I suppose.

I, along with my writing partner, Julia Cohen, wrote Grey’s Anatomy

It’s hard to pinpoint this one – I think I’ve gone through stages; Oscar the Grouch was always a favorite when I was a kid, but so was Rudy Huxtable from “The Cosby Show”, In my teen years I dreamt of writing for Angela Chase from “My So Called Life”, In my early twenties it was probably Samantha Jones from “Sex and the City”, and more recently it would have to be a Jack Donaghy from “30 Rock”.