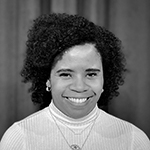 Lauren Bridges hails from suburban Philadelphia. After graduating from a majority white high school that unashamedly had a Native American as its mascot, she received her bachelor’s degree from University of Pennsylvania’s Wharton School of Business, where she played on the Women’s Varsity Tennis Team. Afterwards, she moved to NYC, where she lived in a sixth-floor walk-up the size of your desk.

Tired of seeing rats everywhere, Lauren moved to LA. She worked as an assistant at CAA and then for a string of filmmakers, most recently showrunner Jenna Bans (Good Girls). She also garnered over 15,000 views for her web series “The Girls of Gamma Delta” and published a Thought Catalog essay “Modern Dating and the Logistics of Finding a Boyfriend.” Following the Workshop, Lauren was staffed on Call Me Kat (Fox).