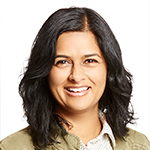 Leena Pendharkar is an award-winning writer and director. She premiered her sophomore feature film, 20 Weeks, at the Los Angeles Film Festival and it was released on Hulu and in theaters in 2018. Leena has also directed numerous short films, including the recent Awaken, starring Parminder Nagra, which is traveling the festival circuit. She is also currently in the CBS Diverse Directors program.