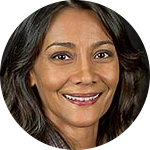 I was born in Mumbai and grew up in Los Angeles and Texas. Being part of a large, international family with roots in India, Africa, and England created its fair share of dramedy, and I absorbed my family’s stories chronicling the highs and lows of pursuing the American dream. When we moved from Los Angeles to a little town outside of Dallas, I found a weird comfort in the outrageous machinations of the Ewings on Dallas. My parents and I watched I Love Lucy re-runs and cried with laughter in recognition of Ricky’s immigrant experiences and Lucy’s attempts to fit in. Shows like The Simpsons and Roseanne articulated, for me, our uniquely American race, class, and culture conflicts.

I am an actor by training and started writing at the encouragement of playwrights I worked with. I found myself writing epic and ensemble-cast plays. As a playwright I see television’s singular story-telling potential. What I love about television is its ability to tell big, complex stories that can develop over multiple seasons, giving characters a full emotional arc. With television, people all across the country are literally inviting your stories into their homes and breaking bread over them, Like the plays of Shakespeare, good television contains something for everyone and provides a backdrop for our various cultural, political, and social conversations.

I gravitate towards deeply flawed characters trying their best to be decent in a hard world. Often these people are both funny and tragic. There are so many delicious characters that fit that bill who come to mind. I fall in love with characters often so this is impossible to answer. So, I will say that today, as I write this, the character of Louie, from the show Louie, by Louis C.K. He captures the strange and beautiful mix of boredom, absurdity, and privilege that comes with being human. Or maybe I just like the character of Louie so much because he often crosses the line of good taste in exposing the truth about human nature.