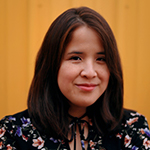 Marie Jamora is a writer-director born and raised in Manila, Philippines. Her film, Flip The Record, won the Grand Jury Award for Best Narrative Short at Urbanworld, and her first feature, What Isn’t There, premiered at the Slamdance Film Festival. She is the director of both seasons of Family Style, an Asian foodie show with Warner Bros. After graduating from Columbia University with an MFA in Film, she returned to Manila to direct music videos, commercials, and television. Marie graduated from AFI’s Directing Workshop for Women and the Warner Bros. Directors’ Workshop and is part of the Lifetime Director Shadowing Program. She is Adjunct Directing Faculty at the American Film Institute.