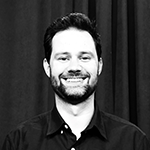 The son of an American CIA agent and an Australian diplomat, Mark Bruner was born in Virginia but spent the next 11 years living in Algeria, Tunisia and Israel. In those countries, TV wasn’t in English, so when Mark moved back to the United States he watched American TV for the first time and got hooked. After Mark graduated from the University of Virginia, his love of writing brought him to Los Angeles, where he worked as an assistant on several TV shows. During that time, Mark wrote freelance episodes of Criminal Minds, Under The Dome, and Agents of S.H.I.E.L.D., and the feature film Suburban Gothic. Mark also produced the feature film Excision, which premiered at the Sundance Film Festival. Following the Workshop, Mark was staffed on DC’s Legends of Tomorrow (CW).