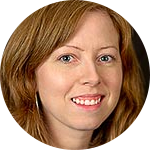 Where are you from and what inspired you to become a television writer?
I grew up all over the Mid West. We finally landed in Shoreview, MN when I was in sixth grade and then stayed there until I graduated from high school. Growing up in small towns and suburbs meant that TV was my gateway to a more exciting life than the one I was leading. Even at a young age, I used to dream up my own story lines for my favorite shows and act them out. My penchant for putting on solo performances for my stuffed animals led to my mom sticking me in theater classes. And after a career as a child actor, I became a playwright. It wasn’t until a few years ago, that I considered writing for television. Having the opportunity to create characters and story lines that reach living rooms like the ones I grew up in feels like coming full circle in the best way possible. I couldn’t ask for a more exciting opportunity.

What Spec did you write to get into the workshop?
Girls

Who is your all time favorite television character and why?
Tami Taylor from “Friday Night Lights”. There have been plenty of TV characters I’ve identified with (Darlene Connor, Angela Chase), but Tami was the first one I aspired to be. She’s such a well-drawn portrait of a regular woman balancing everyday struggles: noble and intelligent and flawed in a way that’s devastatingly real. She’s totally relatable; and yet you watch her wishing you had her awesome talent for giving out spot-on advice or standing up for what you believe in, in such a measured, thoughtful fashion. Who wouldn’t want to pick her brain over a beer? I think that’s a really hard thing to achieve with a character in any medium. Plus she has awesome hair. I think there’s magic in those locks.