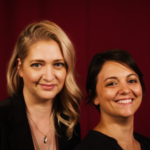 Born in St. Louis as an only child raised by a single mom, Melissa Marlette spent much of her time watching great movies and TV of the 80s and 90s. It wasn’t until high school, and a life‐changing viewing of Mary Shelley’s Frankenstein, where she realized she could tell stories for a living.  Meanwhile, on Long Island, Jen Vestuto grew up in a loud Italian family. The middle child of three girls, sports‐loving Jen was the closest thing to a son her dad had. Being an athlete wasn’t her only identity – she also found solace in writing and making movies throughout high school, and realized this was her true calling. In 2011, the two met in New York on the set of Person of Interest. Spending 14+ hours a day together as PAs, they quickly developed a great team dynamic and also a lasting friendship. After bonding over baseball, great films and huevos rancheros, they decided to take their first stab at writing a script together.  As a team, they love telling stories about seemingly ordinary people put into extraordinarily difficult circumstances. In 2016, they got their first taste in TV writing when they were given the opportunity to co-write the penultimate episode of The Vampire Diaries.