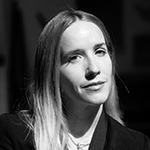 Meredith Danluck began her career as an artist working in film and video. Her work has exhibited at festivals and institutions such as MoMA, PS1, Venice Biennale, TIFF, SXSW, Tribeca, and Sundance. She participated in the 2013 Sundance Screenwriters and Directors Labs for her first narrative feature, State Like Sleep, starring Michael Shannon and Katherine Waterston. She has worked on tour visuals for John Legend, Jay Z and Beyonce, and served as an Executive Producer and Director for Vice. She is currently developing her next narrative feature with the production company Sight Unseen.