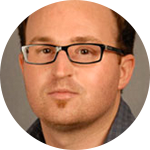 I’m from a small suburb outside of Detroit, Michigan and ever since I can remember I’ve been watching a disturbing amount of television. I guess it’s because TV has been like a forbidden pleasure for me. Growing up, my house received a few over-the-air stations and I was allowed to watch only a couple hours a week. So I had to get creative. I still remember going over to my friend’s house and gorging in all night TV marathons. The writing bug didn’t really hit me until my freshman year in college. That’s when I saw Curb Your Enthusiasm for the first time, and it was like this magical door opened. I realized it took the neurotic genius of a guy like Larry David to breathe the heart and soul into one of my favorite series of all time, Seinfeld, and I just said to myself – I want to do that.

At first thought, Fox Mulder, Dexter Morgan – and even though it’s still in season one, Carrie Mathison from Homeland – emerged as the front-runners. But then a voice kept echoing in the back of my mind. It was a low whisper at first, but then it became a raging battle cry: “Respect my authoritah… Respect my authoritah… RESPECT MY AUTHORITAH!” The voice belonged to Eric Cartman from South Park. And the voice was right. I’ve never seen a character so driven by his mean-spirited, xenophobic, and narcissistic tendencies, but somehow, he still manages to be likeable and we root for him. That is TV magic to me.