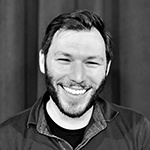 Michael writes stories about outcasts who struggle to overcome internalized shame. He was a Humanitas New Voices finalist, and his scripts have been recognized by the Austin Film Festival and numerous other competitions. When not writing, you’ll find Michael scallop hunting, board gaming, hosting Shabbat, or goofing off with his golden-doodle Biggie Lebowski.