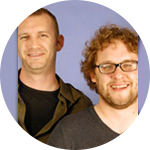 I spent the first sixteen years of my life in the suburbs of Chicago, but I finished high school in Dallas, TX, where my family currently resides. I never seriously considered becoming a television writer until a few years ago when I caught up with Battlestar Galactica on DVD. I found myself naturally dissecting character beats and story arcs until I realized, “Whoa! A great TV season is like a twenty hour movie!Ó It was this “Eureka” moment that forever changed the way I looked at television. Not only can TV tell compelling stories, but a great show also lets you get so attached to characters you can consider them your friends.

I wrote a Justified spec with my writing partner, Nic Rylan

Like my writing partner, Nic, choosing a favorite character came down to the question of which character from The Wire to discuss. I chose Preston “Bodie” Broadus. In season one, I’d written the character off as a low-level street dealer… a murderer… ignorant scum. But as the series progressed, as Bodie’s personality and motivations came to light, I began to adore every second of screen time he was given. No matter what was thrown at him, whether it was pressure from the police or rival drug dealers, Bodie always stood tall. His arc painted a sometimes hilarious, sometimes heartbreaking portrait of a boy becoming a man amidst a life of violence.