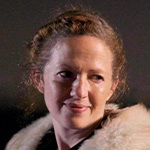 Mo Perkins earned an MFA in directing from UCLA, and her thesis film, Piss Hat, was nominated for a Student Academy Award.  She is an alumnus of The Ryan Murphy Half Initiative, WeForShe Program, Sony Diverse Directors’ Program and Film Independent Labs.

Most recently, Mo directed every episode in season 2 of the romantic musical comedy I Ship It for the CW.  After the Warner Bros. Directors’ Workshop, she directed an episode of Manifest (NBC).