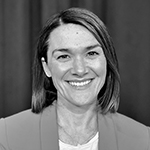 A Bay Area native, Molly was raised by a single mom so she never felt weird about tampons or being in charge. A lifetime theatre nerd, Molly trained as an actor at Bates College in Maine, studied abroad in London and Jamaica, and then hightailed it to New York. She spent over ten years teaching theatre to inner city kids and improv to incarcerated youth in Brooklyn and worked as an actor with Ars Nova, The O’Neill, CBS, and The Metropolitan Museum of Art. After training at UCB, she wrote and starred in her web series Things I Hate, which went on to win Best Comedy at the NBCU Short Film Festival in 2016. She’s written and starred in several viral sketch videos, written for NBC’s Brands Partnerships, and her short film Avalanche, a miscarriage comedy with Lennon Parham and Vivian Bang, premiered at the Lower East Side Film Festival in June 2020.

Following the Workshop, Molly was staffed on Pivoting(FOX).