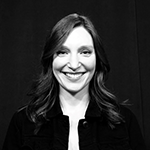 Molly Schreiber is a comedy writer, actor, and director. Raised in Boston, she studied acting at Tisch School of the Arts at NYU. After college she returned to Boston and performed in plays by Pulitzer Prize winners in beautiful 1000 seat theatres until she tripped and fell into doing comedy at Improv Asylum, a 200 seat club in the basement of a CVS. Shortly thereafter, she jumped ship to LA to do film and tv. As an actor, she has appeared in Westworld, Grey’s Anatomy, and Daddy’s Home 2. She honed her comedy at The Groundlings and UCB and started writing and producing sketch comedy. She has garnered millions of views creating content for Funny or Die, McSweeney’s, Warner Bros. Records, music videos and podcasts, and was selected for Just For Laughs as a New Face: Creator in 2018.