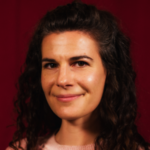 Morgan Dover-Pearl was born in Austin, Texas, but thanks to her adventurous parents spent her formative years in Spain and Argentina.  Morgan’s love for storytelling was first ignited by Argentina’s abundant power outages, when she would write plays for her and her little sister to perform while they waited out the hours of darkness.  She received a BFA in Acting from Southern Methodist University and an MFA in Acting from Brown University.  After years of pursuing acting, she decided she was ready to return to her writing roots.  Her debut as a writer came in the form of a short film that had its world premiere at the Austin Film Festival.  Encouraged and inspired by that experience, she made the decision to shift her focus to writing fulltime, and very soon thereafter was selected to participate in the Warner Bros. Writers’ Workshop.