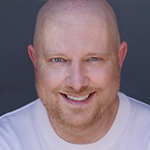 Paul Ditty was born in Bemidji, Minnesota, home to the famous Paul Bunyan and Babe the Blue Ox statues. While lacking his namesake’s lumberjack prowess, Paul compensated in other ways, including a short-lived stint at the age of nine as his trailer park’s own Nancy Drew. When Bemidji’s lack of missing persons and jewel thieves caused his detective agency to fold, Paul discovered a love for telling stories of his own.

After graduating with an English degree from the University of Minnesota, Paul moved to Los Angeles to pursue TV writing. His first writing break, however, came in the form of a book when his satire of children’s detective books was published. For years, Paul was the Susan Lucci of TV writing programs and competitions, where he was a finalist in several until finally winning his equivalent of a Daytime Emmy: a prized spot in the Warner Bros. Writers’ Workshop. Currently, Paul lives in Long Beach with his husband along with their cat, dog and drought-tolerant yard.