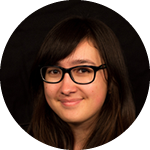 Where are you from and what inspired you to become a television writer?
I was born in Russia, which I am by law required to call The Motherland. Since Russia is famous for their half-hour comedy and sleeper agents, and commitment issues prevented me from pursuing the latter, I decided to give writing a go. Novels were actually my first love, but I can’t think of anything better than being in a writers’ room on a comedy show, where you get to tell jokes all day and make people laugh. I also love television as a medium because you get to explore all facets of a character over time.

What spec did you write to get into the Workshop?
It’s Always Sunny in Philadelphia

Who is your all time favorite television character and why?
I hope it’s not blasphemy to talk about hour-long drama, but Fox Mulder was the first fictional character I wanted to hold hands with (keeping this very PG). He had great hair, was extremely intelligent, and had a dry sense of humor. He was an outsider who often ended up being his own worst enemy, which made him compelling to watch. Even when a struggling Russian voice-over actor dubbed his dialogue.