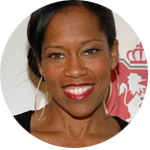 In 2014, she directed four episodes of Being Mary Jane, notably becoming the first female director on that series and returned to direct two more episodes the following season.

Regina’s involvement with the ABC/Disney Diversity Director’s  program led to her directing an episode of Shonda Rhimes’ hit ABC series Scandal for which she is set to return again as a director this year. She will follow up with directing episodes on two more highly anticipated shows, Shonda Rhimes’ The Catch and OWN networks’ Greenleaf.