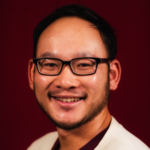 Richard Lowe spent his childhood working in a grocery store as the presumed heir of a multi-generational family business started by Chinese immigrants.  As much as he loved grinding meat and stocking shelves, his fondest memories are of him and his brother playing in the warehouse, coming up with stories about how the customers were alien space invaders or peg-legged pirates. As a writer, Richard has written for Dr. Ken (ABC) and Walk the Prank (Disney XD). His pilot, Growing Up Dictator (a comedic look at the childhood of Kim Jong-un) was a finalist at the Austin Film Festival. He studied with Upright Citizens Brigade and produces sketch comedy videos on his YouTube channel Aisle Five Comedy. He is also the host of the writing podcast Pulling Your Hair Out. Prior to writing, he was an editor on The Good Fight (CBS). Following the Workshop, Richard was staffed on God Friended Me (CBS).