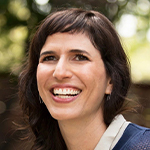 At six feet tall and one hundred pounds, Rose Surnow looked like a Jewish praying mantis in high school. With no chance of blending in, Rose was forced into comedy as a way to win friends and influence people. Extremely gregarious since day one, it was a surprise to no one when Rose became a stand-up comedian in her 20’s. After years of making drunk strangers laugh, Rose realized she was more passionate about writing comedy than performing it. She transitioned into writing humor pieces for magazines including VICE, GQ, New York Magazine and more. Once she was making her full-time living off being a writer, she finally had the confidence to move to LA and pursue her lifelong dream of writing for television.

Rose got her MFA in Screenwriting from USC and was selected to participate in such prestigious writing fellowships as the Sundance Episodic Lab, the Screenwriter’s Colony in Nantucket, and the Warner Bros. Writers’ Workshop. Rose writes grounded, emotional comedies and dramedies about messy women trying to get their shit together. Go figure.

Following the Workshop, Rose was staffed on Pivoting(FOX).