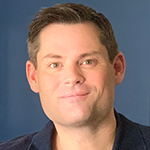 Ryan is a combat veteran, Navy lieutenant, foster dad, LGBTQ+ activist, and recovering unscripted executive. Growing up in a military family, Ryan found refuge in creative outlets. He earned his bachelor’s degree from Harvard University and his MFA from the UCLA Film School. His UCLA thesis film premiered at Sundance in 2012. After grad school, Ryan became a producer and executive in unscripted and digital content, ultimately serving as an SVP at two major production companies.

Ryan is also a lieutenant in the U.S. Navy Reserve, having served all over the world, aboard aircraft carriers at sea, and on a lengthy combat deployment in Afghanistan. His wartime experience in Afghanistan was transformative, inspiring much of what he writes today. He’s won or placed in several competitions including Launch Pad, Screencraft, Harvardwood and the Most Staffable Writers List. Ryan and his husband, Rudy, are the founders of the LGBTQ+ Voices Scholarship at UCLA and are currently foster parents of a very active toddler.

Following the Workshop, Ryan was staffed on Manifest(Netflix).