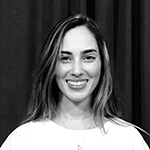 Sabrina Deana-Roga was conceived in Belgium, the chocolate and waffle capital of the world, but her parents thought it best that she be born in New Jersey, the armpit of the United States. When she was older, this seemingly bizarre left turn led her to question how we choose our paths and how even the smallest decision can alter the course of one’s life. It produced in her an empathy for the human condition and an enchantment with how each person’s story is uniquely different. That, combined with her love for the Twilight Zone, ghosts, and all things unanswered, led Sabrina to attend Loyola Marymount University where she studied screenwriting. Prior to the Workshop, she was the writers’ assistant on NBC’s Blindspot, where she co-wrote an episode starring Bill Nye the Science Guy. Following the Workshop, Sabrina was staffed on Prodigal Son (FOX).