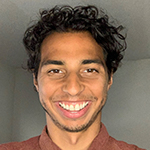 Sam Elhindi grew up in the quaint river town of Winona, Minnesota, the son of a Muslim Sudanese immigrant father and white Catholic mother. His upbringing was a cross between The Mighty Ducks and Coming to America. After getting his degree in Film/TV from the University of Wisconsin, he continued his “education” by studying improv and sketch. To pay the bills, he worked countless jobs in the industry and elsewhere, such as coaching youth soccer, delivering sandwiches via bicycle, and lending his awful Irish accent to a local pub commercial. Following the Warner Bros. Writers’ Workshop, he was staffed on Head of the Class (HBO Max).