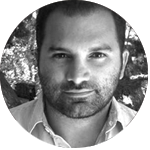 Sherwin Shilati is a director with an incredibly diverse background in the entertainment industry. Raised in California, Sherwin earned a scholarship to the University of Southern California where he dropped out of medical school to pursue filmmaking. By age 23, he had worked on the hit television series, Lost, and directed the award winning short film I Kicked Luis Guzman in the Face, starring Luis Guzman. He followed up his critically acclaimed short with award winning independent television pilots Hit Factor (starring James Cromwell) and MERRIme.com before writing and directing his critically acclaimed short film, The Key.

Sherwin’s commercial directing career began when he was asked to write and direct the 2008 NBA All Star Campaign for Amare Stoudemire starring David Spade. He has gone on to direct for agencies and clients such as Ogilvy, Chiat\Day, Digitas, Electronic Arts, GMC and the New York Knicks. As a result, Sherwin founded YayBig in 2013, a production company working in commercials, film, and television.

In 2016, Shilati completed production on his feature film debut, People You May Know (2017 release expected), starring Nick Thune and Usher. He recently took part in the prestigious Warner Bros. Directors’ Workshop and will make his television directing debut on Lucifer (FOX).