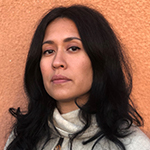 Florida born, Solange Morales was raised by Peruvian-Chinese parents who gifted her with a non-traditional upbringing in the streets of Miami Beach’s Art Deco district while sending her on vacation to Lima, Peru – then a hot-bed of guerilla warfare. It was this constant negotiation of her identity that cultivated her empathy and set her on a journey of writing stories about underdogs, imperfect characters and hip-hop.

After quitting her job with a Ponzi schemer, Solange finally made the leap to LA to work as an assistant to the writer and producers of the Notorious B.I.G. biopic. She then worked as an Associate Producer on a Tupac and Iron Mike documentary for ESPN before landing in the halls of Columbia University’s MFA film program, where her thesis short film, Mal de Ojo, was acquired by HBO. Solange was the Writers’ Assistant and wrote the penultimate episode for Season 2 of Hulu’s Wu-Tang: An American Saga. She is an alumna of NHMC’s TV Writers Program and currently writes on a hip-hop themed mobile game app for the lead rapper of Cypress Hill.

Following the Workshop, Solange was staffed on Legacies(CW).