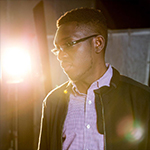 Solomon Onita’s films have garnered global acclaim. He recently completed his debut feature film Tazmanian Devil, and also wrote and directed a short film, Joy, that deals with the complicated position of female genital mutilation around the world. Joy has screened at over 60 film festivals, was a finalist in the 2016 HBO Short Film Competition, and was subsequently distributed on all of HBO’s platforms.