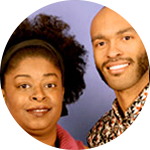 I grew up in Los Angeles, California. As a child actress, I acquired roles on such television shows as Facts of Life, 227,and Designing Women. Although I found acting to be reasonably fulfilling, I possessed an immeasurable hunger to become a TV writer. While working on these various productions, I became mesmerized by the brilliant storytelling ability of each respective writing collective. To my young eyes, the capacity of these writers to conjure a wide range of emotions (e.g. humor, fear, anger, and courage, just to name a few) in order to entertain the viewing public in a thirty-page script was akin to the magic of David Copperfield. When I expressed my aspiration to become a TV writer to famed writer and producer, Norman Lear, he told me to just “write” – and write I did. At the tender age of thirteen, I wrote my first spec script for the television sitcom, Who’s the Boss.

I, along with my writing partner, Jonathan Kidd, wroteSouthland.

This is a no brainer – Sue Ellen Ewing of Dallas. Sue Ellen Ewing was the most multi-dimensional female character on night time soaps who brilliantly demonstrated the complexity of humanity more generally and womanhood more specifically – through her struggles with addiction, insecurity, ambition, low-self esteem, and infidelity – all while trying to keep her family intact.