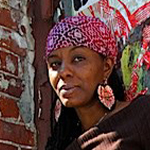 New Orleans native Stacey Muhammad was one of thirteen directors chosen by the
DGA for their inaugural Commercial Director’s Diversity Program. Her recent work
includes directing episode 411 of Queen Sugar for OWN as well as commercials for
The AD Council / AARP. She’s currently working on her first feature film titled The Return and has been attached to direct a reimagining of the 1932 film White Zombie.