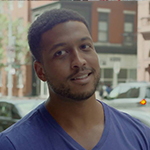 Tahir Jetter is an alum of the Sony Diverse Directors Program and has shadowed on The Goldbergs and Insecure. His feature film, How to Tell You’re a Douchebag, and his short film, Close, both premiered at the Sundance Film Festival. He is currently also developing several projects for film and television.