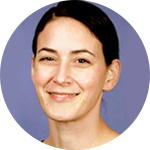 I grew up in Metuchen, New Jersey, a small commuter town about an hour outside of New York City. My brother and I were latchkey kids and spent a lot of time glued to the TV set, watching reruns of classic shows. Even back then, I’d find myself finishing characters’ sentences and guessing what was going to happen next. It drove my brother crazy, but he’s pretty proud of me now.

Carrie Bradshaw from “Sex and the City.” I was single during the show’s run, and found her character to be utterly relatable and wonderfully flawed. I also feel a sense of loyalty to Sarah Jessica Parker – saw her as “Annie” on Broadway and loved her in “Square Pegs.”