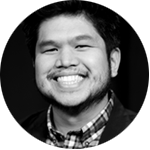 Thomas Reyes is a comedy writer from Los Angeles. Growing up, his Filipino-immigrant parents moved a lot. He attended seven different schools, and lived in Las Vegas for seven years, all by middle school. As an only child, he could make friends easily, but sitcoms became his surrogate siblings. He attended UCLA and after graduating, instead of going to law school, he studied sitcom writing at UCLA Extension. He has worked in a variety of positions in both scripted and unscripted television. He has written for the Disney ABC Talent Showcase, the CBS Diversity Sketch Workshop, and was a finalist at the Austin Film Festival. He has written for ISAtv and co-wrote the BuzzFeed series Ask an Asian. Following the Workshop, he was staffed on American Woman (Paramount Network).