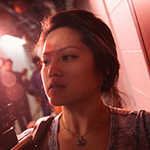 Tiffanie Hsu is a writer/director whose work has played at Sundance, Cannes, HBO, and Netflix. She was selected as an HBO Visionary for her short film, Wonderland, and is developing the feature adaptation in both the Sundance and Film Independent Screenwriting Labs. She is an alumna of UCLA’s School of Theater, Film, and Television, AFI’s Directing Workshop for Women and Sony’s Diverse Directors Program. She grew up in Wisconsin, Taiwan, and Southern California, and got her start directing stop-motion animation and location-specific Shakespeare.